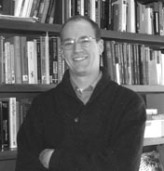 Dr. Kevin Whetter teaches and researches medieval literature at Acadia University, Canada, and is the President of the North American Branch of the International Arthurian Society. In this post he considers the importance of the preservation of physical books; how the experience of reading is affected by the formats in which we read; and how valuable the work done by research libraries is for scholars.

I was in London and the BL last week doing some work on what is hopefully a new book on Sir Thomas Malory’s Morte Darthur. I’m not sure what the academic book of the future will look like, but I know what an influential book of the past sometimes looks like: it looks like a medieval manuscript – because it is.

For those who study manuscripts, this doesn’t need saying; but for those perusing a website about the future of the book, it might be worth considering. After all, Malory studies even today is shaped by the discovery in 1934 of the Winchester manuscript of Malory’s Morte Darthur, a manuscript now in the British Library, and catalogued British Library Additional MS 59678. The importance of the manuscript holds true even for those scholars who follow William Matthews in thinking that William Caxton (a fifteenth-century publisher) printed from a revision of the Morte made by Malory himself and evident in Caxton’s version of the Roman War story, but not in the Winchester manuscript. Thus whether Winchester is closer to Malory (as most of us believe), or superseded by Caxton’s copy-text (as Matthews and his followers believe), the manuscript remains central to the debate.

Much of my own recent research to date has been enabled by two kinds of book: the old-fashioned (and monochrome) EETS – Early English Text Society – facsimile of the Morte’s manuscript, a book the Acadia copy of which spends more time in my office than on its library shelf; and the new-fangled digital version of the book available through the British Library or the Malory Project. Such digital facsimiles are now of course wide-ranging and hugely beneficial, allowing scholars such as myself, who live and work far away from any collection of medieval Arthurian manuscripts, to see what the manuscripts look like in colour.

And yet, for all the many scholarly benefits of such digital editions, we still, I think, need access to the originals – and so need libraries who can conserve and preserve the original materials and allow scholars and readers to access them directly. Part of my own book project, for instance, involves investigating possible connections between manuscript layout and contexts on one hand, and narrative and textual theme on the other. BL Add MS 59678, or Winchester as it is still sometimes called, has a unique colour layout whereby all character names, most place names, and some objects, including ‘Sankgreal’ and ‘Excalibur’, are rubricated in red ink. Obviously the black-and-white EETS facsimile cannot reproduce the colour. The online digital facsimiles can do colour, but not the effect of the old-fashioned reading experience, of turning pages and seeing what comes immediately from what went before.

Until last week, all of my research about the Morte’s manuscript was done via the two facsimiles. But there is something unsettling, for me at least, about reading a book by clicking a mouse, and since I am investigating why the rubrication exists in the manuscript and what it might be for, part of my enquiry attempts to trace the effect of reading the manuscript version of the story. Thus part of my request to see the manuscript, which is highly restricted, involved the claim that, for all of the benefits of digitized manuscripts for modern researchers, medieval readers did not use computer screens or mouse pads, and modern research needs to make sure we do not misrepresent the original reading experience. Hence, I said, I needed to examine Winchester directly.

There were many other justifications (it’s a long application form), but for the relevance of the book of the future and important books of the past, that was the key point. And it (and the others) worked: I was eventually granted access to the unique manuscript copy of my beloved Morte Darthur.

And the experience did indeed allow me to form conclusions and make discoveries that I missed when reading in black-and-white or online, discoveries in fact that are really only apparent in looking directly at the old book itself. Having spent some time with the manuscript, I can also say with conviction that neither the EETS facsimile nor the online facsimile produce the sheer awesomeness of the reading experience, of looking directly at a book that brings us as close to Malory as we are ever going to get until the human species perfects time travel.

This closeness can only come about through the old books, the manuscripts, directly. And for preserving those books and giving us access to them, we are all profoundly indebted to our major research libraries. As for being able to touch the manuscript directly, it was, of course, bloody marvellous! So marvellous that I nearly spilled my post-reading drink after the manuscript went back to its safe — almost.

Follow The Academic Book of the Future on WordPress.com