Today’s guest post is by PhD researcher and librarian Kit Kapphahn. She talks about the importance of the library/user relationship, and how Aberystwyth University Library used the recent World Book Day as an opportunity to strengthen and celebrate this relationship and further engage its community of readers, both digitally and within the physical space of the library.

Wales has been known for poetry since the ninth-century Historia Brittonum named the bards who were ‘renowned in British poetry’, so it might not come as a complete surprise that Aberystwyth University decided to celebrate World Book Day with a poetry contest. Instead of strict-metre cynghanedd, though, we decided to go with the simpler haiku – a form that is both fairly quick to write and, conveniently, short enough to fit in a Twitter status. (Although, it must be said, some of the Welsh entries were in cynghanedd anyway, which was fabulous!)

Aberystwyth’s library has a great relationship with the students and staff at the university and we’re always looking for new ways to foster engagement with our users. Jamie Harris, one of the three masterminds behind the haiku contest, said, ‘We have conducted temporary feedback harvests before and found our library users, both students and staff, to be quite witty and keen to engage with us, so thought it would be interesting to see if they could harness this in the form of a poem about the library.’ Of course, offering cake is always a good incentive too! 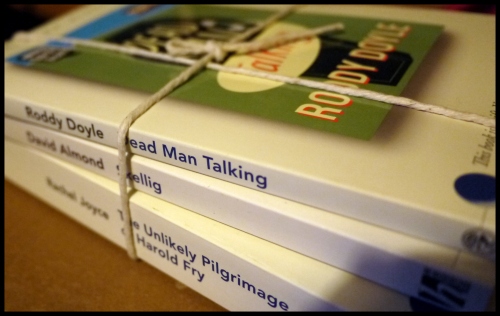 The day itself fell in the middle of undergraduate dissertation deadlines in several departments, so the library was a busy and electric place already. The timing may have contributed to the atmosphere – students could drop off or pick up a bound dissertation, write a haiku to calm their thoughts, and celebrate with cake! There were also a few people who came in specifically to take part, having seen it advertised around the campus, and still more submitted via Twitter under the hashtags #haikuaber and #haicwaber.

We awarded prizes in two categories – English and Welsh – and guessed we’d get quite a few entries in both. But those weren’t the only languages involved, since we also received several submissions in French and one in Korean (and one in Latin, but that was mine – I’d just come out of a reading group where we’d been doing Reginald of Canterbury so it was fresh in my mind). All told we had around ninety entries and went through several large sheet cakes – the biggest challenge, according to the judges, was deciding between so many great entries.

The poems themselves ran the gamut, from thoughtful to sweet to funny. One, for instance, captured the ecology of physical books:

As trees and corpses in balm

Paper, on which we scribe most calm

That wasn’t the only entry to deal with the physicality of books – some used the forum to discuss the authority of books over Wikipedia or to bemoan the sleep-deprived student lifestyle. Some entries reflected a clear love affair with books and libraries that reminds us how important these spaces are to students in a way that can’t be replaced entirely by online resources.

Another witty entry appealed to the pathos of the library staff approaching the end of term:

Cry not over my late book,

I shall pay my fines!

Then there were those that were unabashedly honest in their intentions:

I too can do a haiku

And I want free cake.

University libraries face many challenges at the moment. Budgets are under threat, journal subscriptions are extremely high, and staff and resources are being cut or not replaced. What this really showed us, along with how wonderfully clever our students are, is how eager the academic community is to be involved and engaged with the library, and how important it is to them. It’s more than a collection of facilities or a computer room, but an integral part of the university experience and something they value.

We get a lot of feedback from our students and staff because we encourage it – whether they have suggestions, complaints, or praise (and we get plenty of all three) we want to hear it. The praise makes us feel good, of course, but we also know we can’t address any concerns we don’t know about. I’m occupying the middle ground, being both a postgraduate researcher and library staff, and often try to be an ambassador for both sides. This is definitely made easier by the willingness of the library staff to really listen to student feedback! It results in a feeling of partnership as we all work toward the common goal of providing the best experience possible. When librarians and students (and those of us who are both) feel that we’re all on the same side, it makes it easier to keep going in the right direction.

It also makes for a lot of spontaneous poetry – and cake!

Take a look at the winners and all the haiku entries at http://www.aber.ac.uk/en/is/news/wbd/.

Kit Kapphahn is a PhD researcher and librarian at Aberystwyth University, focusing on gender and genre in medieval Welsh Arthurian literature. She is also the English-language winner of the Aberystwyth World Book Day haiku contest, which is probably the only poetry award she will ever win. She is on Twitter as @aelura.

Principal Investigator Dr Sam Rayner has been busy meeting with people and organisations about The Academic Book of the Future. Here she writes about her recent trip to North Wales, and some of the ways that researchers, publishers, students, and libraries in Wales are getting involved with the Project.

Last week I set off for Project meetings with some of our Welsh partners at Bangor University.  Professor Tom Corns from the School of English sits on our Advisory Board, and is keen to see the Project address the challenges around Welsh-medium research outputs, and those on Welsh-focussed topics. I talked with Dr Eben Muse, head of the School for Creative Studies and Media, about the best ways forwards with this, so watch this space for more news on that soon!  In addition, given Eben’s interest in bookselling, both new and secondhand, we talked about ways of linking his research on this into our work with the Booksellers Association, and possible connections and events as part of our Academic Book Week in November.  We are also planning a summer school/ workshop series on publishing academic books in Wales, so any publishers or editors that might be able to help us with that, please get in touch.

While in Bangor, I gave a seminar to some of the MA students in the School of English as part of their Editing Texts module.  Convened by Professor Helen Wilcox and Dr Sue Niebrzydowski, this turned into a very lively discussion about some of the issues around copyright and Open Access, linked to the Crossick Report, and the Academic Book of the Future’s aims and plans.  Thanks to all for making it such a productive session!   Given that the School of English at Bangor has such a rich tradition of scholarly textual editing (Peter Field’s new edition of Malory, Tom Corns’s involvement in the multi-volume edition of Milton’s works, and his edition of Gerrard Winstanley,  and Helen Wilcox’s edition of George Herbert are just some of the recent examples), we are looking at holding an event in the Autumn that celebrates this, and the scholarly and publishing expertise that goes into making editions of literary works.

Professor Astrid Ensslin is working on another AHRC Project, Reading Digital Fiction with Dr Alice Bell from Sheffield University.  There are strong connections between the two projects – both engaging with the nature of the book – as well as Astrid’s expertise in digital narrative more generally, through gaming and language ideaologies. A chance to brainstorm some ideas with Astrid means we have some exciting cross-over activities and events to consolidate in coming weeks.

Dr Maggie Parke, whose PhD research used blogging and fansites to help crowdsource the data she used,  is going to work with the Project and any interested publishers on looking at ways to help researchers such as herself publish outputs that don’t fit the traditional monograph model.   This could be a chance to flip the current publishing proposal model, by getting together some other new types of research  and asking publishers to pitch to the researchers how they might best add value to that material.  A Dragon’s Den seemed a very appropriate idea to bring away from Wales!

I’ve come back to base with plenty of new perspectives for the Project (some I can’t announce yet), and links to connect with the National Library of Wales and the University of Wales Press.  If you are part of a Welsh university, or are a Welsh bookseller or publisher who deals in academic books and you have ideas to add into the Welsh part of this Project, please do get in touch with either me (s.rayner@ucl.ac.uk) or Rebecca Lyons, our Project Manager (rebecca.lyons@ucl.ac.uk).

We look forward to hearing from you!