On 16th November 2015 Brown University hosted a panel discussion as part of Academic Book Week. This post outlines the key issues raised during the debate.

Note: The video recording of the full discussion is available to watch here: https://www.youtube.com/watch?v=Vl7O7DUB__8&list=PL2PwShbFBf4Bk6AaDM2mGixpS_7TYasyT 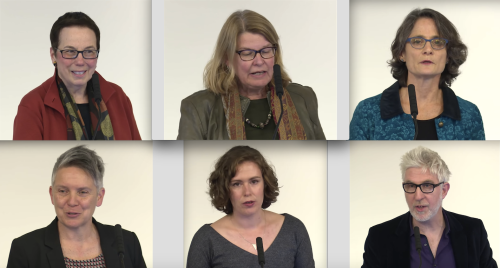 The discussion was moderated by Sheila Bonde, Brown University Professor and Chair of History of Art and Architecture and Professor of Archaeology and the Ancient World. The publishers and editors that participated in the panel discussion were

Sheila Bonde introduced the questions up for discussion:

The first respondent was Amy Brand, MIT Press. Brand stated that MIT Press has been at the forefront of digital publishing (mostly PDF and open access). The digital book, Brand argued, is more than an innovation of the print book, but rather adds to/builds on the foundation of the book – it does not supplant it

How do we juggle both print and digital? Brand suggested that a uniform model is being replaced by a multiplicity of models: publishers need to remain nimble and responsive to the needs of researchers and readers. We have an opportunity now to open up books to be seen in new ways – ‘permeable’, ‘altered’, ‘sculpted’. In terms of innovation, the University of Minnesota Press’ iterative publishing offers another form of ‘permeability’, with various new opportunities for readers to annotate texts.

Brand acknowledged that print books are still objects of desire – perhaps even more so now that there are other options. MIT does print and digital simultaneously, including open versions in response to author desires. So far, Brand stated, this seems to have helped sales. Online versions offer additional/supplementary and updatable materials.

Brand drew attention to other practical issues around the academic book in current contexts. For instance, the average publication cost of a digital monograph is around $30K. These costs are significant. The question of discoverability is also an important one: how do publishers make digital books more visible/accessible to readers? Linking chapters? Indexing? And how do we effectively evaluate scholarly online publications? Bookmetrix can track citations, downloads, readers, and mentions – is this a legitimizing tool? Amazon’s line-by-line payment to authors provides an opportunity for authors to see into reading behavior – should this count as we evaluate digital publications? There is a difference, however, between short-term and long-term uses of the book. Evaluations such as Bookmetrix are useful, but don’t pick up value that accrues after several years. Same for Amazon – they both measure what is being read now, but not what is being bought and read later. There are potentially unforeseen uses of knowledge that we can’t yet tap in to.

Brand finished with a closing question: how do we make sure content remains accessible?

The second panelist was Ann Brackenbury, University of Toronto (Higher Ed division). Brackenbury highlighted that much digital content is still static (such as PDFs). She asked: Why are we trying to change, despite the resilience of the book (as an object)?

The mission of the Higher Ed division at the University of Toronto is to bring scholarship and teaching together in a more productive relationship by, for example:

Brackenbury spoke about their new series/initiative: EthnoGRAPHIC, which is ethnography in a graphic illustrated novel form. The hybrid of linear text-based culture and visual culture in this series keys into the ways students take in information today. This hybridity, Brackenbury argued, requires complex decoding skills, but it also offers a theoretical and disciplinary challenge, too. It allows author/scholars to build rich worlds, characters, and locations. The value added is the creation of the narrative or story, and the ability to rewrite scholarly content for different audiences.

Brackenbury suggested that graphic novels, or comics, build communities around them. They are also useful for ‘showing’ (rather than just ‘telling’) a story, and mean that audiences can be extended through transmedia: telling a variety of stories across different channels. Importantly, she argued, combining traditional and new media approaches means building new connections, and she suggested that the academic book of the future is connected in a broader sphere via multimedia presentation formats and multiple incarnations.

The third speaker was Sarah Lippincott from the Library Publishing Coalition. Lippincott started with an explanation that the publishing landscape is diverse, including print and digital, and that the production of research is outstripping the capacity for publishing it. She also suggested that new forms of inquiry and understanding by authors and readers may change the way we engage with books, and that the most important element of the academic book of the future will be openness, meaning it is free to use, free to read, and free to remix. This openness, according to Lippincott, is both attainable and sustainable, and involves a re-imagining of the monograph as tied into—not separate from—the academy. This model, she argued, can work for the humanities; subsidizing monograph publishing up-front through the university.

Lippincott went on to further define what she means by the term ‘openness’:

The final speaker was Robert Harrington of the American Mathematical Society (AMS). The AMS commits to keeping its books in print in perpetuity – in math disciplines older books are still studied, and Harrington argued, print is here to stay. However, regardless of form, we need to create relevant, high quality content.

Harrington broke down the academic monograph into several factors:

He also offered an argument against open access: if you publish on the basis of merit vs. market, then you have to define merit. Perhaps instead, he suggested, we need mixed economic/business models – and, he asked, isn’t applicability to the highest number of readers (market) one way to do that?

In addition to continuing with conventional monographic publishing, even in electronic form (PDF), AMS is experimenting with innovative digital features for readers and for authors, including:

The official debate ended there. The Academic Book of the Future Project would like to thank Brown for organizing and hosting this event, and would like the extend the debate to you: what do you think of the issues raised here? Let us know!