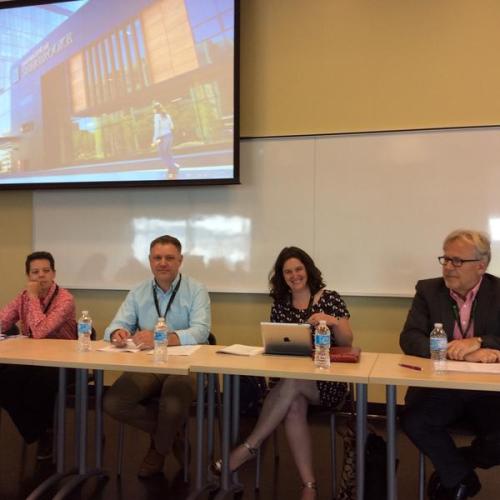 The theme of the conference – Generations and Regenerations of the Book – was highly appropriate to discuss in a round table the future of the academic book. The round table consisted of Nick Canty, UCL, Christoph Blasi, Gutenberg University Mainz, Claire Squires, Stirling University and Siobhan McMenemy, University of Toronto Press. The event was chaired by Alexis Weedon from the University of Bedfordshire. Each participant briefly addressed the topic. Nick Canty outlined the AHRC Academic Book of the Future project, Claire Squires asked how SHARP could consider the question and where the topic sits in the context of Book History before addressing the definitions – what is a book, what should we consider an academic book and how what timeframe should we consider for the future. Siobhan McMenemy set out the publisher perspective with a focus on costs, monograph print runs and commercial imperatives with a sobering thought that a monograph in Canada costs C$ 32,000 to produce. Christoph Blasi saw the topic from two perspectives; bottom up driven by technological advances and the ability for content to be manipulated and distributed in radical grass-roots ways, and top down driven by institutional requirements – such as the UK REF. While we cannot know what the future holds there are some reformist top-down approaches in universities.

The debate was then opened up to the floor and started with a discussion around predatory publishers of the sort found on Beale’s List which try to hoodwink naïve researchers wanting to get their work published. This sort of publishing activity however should be seen as a symptom of the environment and not the cause. There was however a recognition that there needed to be a value shift and a questioning of whether the monograph was appropriate for all disciplines and in particular emerging disciplines – does the monograph give more authority to these as the discipline builds its infrastructure and seeks academic recognition? There are questions here around legitimacy and innovation which have yet to be resolved. Early career researchers may consider publishing a monograph from their PhD but they may achieve more visibility by publishing papers in a journal instead.

The question of funding and money was addressed which was seen as a significant issue for Arts & Humanities disciplines where the cost of Open Access books is prohibitive. Publishers are certainly experimenting with new business models such as the University of California Press community business model which a member of the audience saw as a possible solution here although this initiative is currently funded by the Mellon Foundation only for a limited period. A further suggestion was that university presses might alleviate competition by honing their publishing lists so they (the publishers) are unique. This route is being actively pursued by the Association of Spanish University Presses which is encouraging its members to specialise by discipline. The University of Toronto Press expect Open Access models to reduce profits by 50%.

The functionality of print and digital books was debated at some length with some members of the audience disliking Ebooks which were seen as less easy to navigate than paper despite innovations from publishers allowing users to annotate the content. This led on to a discussion around whether we are witnessing the slow demise of the library as a space for learning and whether students and universities needed a physical space any longer. The University of Toronto built a new library but has changed the name to a student learning space and provides limited access to print books. Ebooks should enable a convergence of content and pedagogy through virtual learning environments although this presents challenges for publishers who risk their business models changing from institutional sales to libraries to selling to the individual student.

The round table concluded with an acknowledgement that the future of the academic book will be shaped by discipline and technology but we are likely to exist in a hybrid print and digital world for the foreseeable future, and at least until there is an institutional recognition of content taking novel and innovative forms.

While the round table finished, the debate continues and follow-up activities will include blog posts for the Academic book of the Future website and a post by forum chair Alexis Weedon. The discussion will be taken forward through numerous and varied activities as part of the AHRC project and specifically during Academic Book Week, 9-16 November 2015.

Academic Book Week aims to encourage discussion around the future of the academic book while looking at how scholarly work in the arts and humanities will be produced and read in coming years. The week will see academic books discussed, showcased and even written across a number of events – notably a launch event with academic publishers at Stationers Hall in London on Monday 9 November and the Opening Up the Book Debate with Kathryn Sutherland, University of Oxford and Marilyn Deegan, King’s College London, while the British Library will host an academic book showcase ceremony and Palgrave Macmillan put the writing of an academic book into practice with a faster publishing model aiming to publish a book in a month.

Through The Academic Book of the Future project the opinions of all those who read, write, sell, produce and use academic books can be heard and the topic will be discussed at the next SHARP conference in Paris in 2016, an issue Claire Squires was keen to see addressed and saw as an issue central to the mission of SHARP.